Champion generators are one of the leading power generation equipment companies recognized around the globe. Over the years, Champion has been offering long-lasting and reliable power machines in the world market. These interesting facts might make you ask,  where are champion generators made?

The Champion power company designed the champion generators in the U.S., whereas the generator’s production and assembling take place in China. Although it is a Californian-based American company, the mass-production of the generator parts takes place in Zhejiang, China.

This article presents you with detailed information on all you need to know about Champion generators. Read on!

Where are Champion Generators Made?

The American-based company, Champion, makes their generator parts production and coupling in China. The generators are ideal for home, office, and industrial utilities. Due to the generator’s affordability and high performance, it has become a household name in North America and all around the world.

Among its series of generators are portable, inverter and home standby generators, even log splitters, winches, and engines. Since its inception, Champion Company has sold over 2,500,000 generators only within North America, rising to be reckoned with in the global market.

What are The Distinct Features of Champion Generators?

Champion generators have yellow and black designs that stand them out over all other generator brands. Their recent generator models use inverter energy as well as dual-fuel energy. With this feature, the generators use either propane or liquid gasoline fuel. Their generators engines can go for long periods before refueling. This means that the fuel consumption of their engines is low.

Champion generators have electric buttons and batteries for seamless powering of the engines. Most of them also have foldable handles and fixed wheels. Also, most home standby generators turn on automatically once the power goes out.

The generators don’t require a warming kit because of their 24-volt powering system. They also function within a temperature range between -22o F – 104o F.

Distinct Features of the Champion Generator

What is The Warranty of Champion Generator?

Most Champion generators come with up to 3 years warranty for their power equipment.

What Are Some Of The Best Models Of Champion Generators? 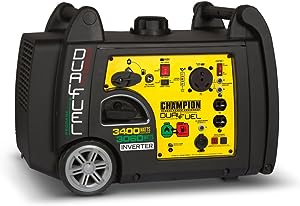 Inverter generators are cherished because of the more advanced features that make them a preferred choice to regular generators. These generators are more fuel-conservative, quieter, and most essentially—provide ‘clean energy.

The Champion 3400 generator is one of the handfuls of generators that come with dual-fuel options. It is a 97lbs machine that has a 50amps power output. This generator is ideal for outdoor camping and RVs. Asides from being a perfect option for Recreational Vehicles (RV), the Champion 3400 also functions properly for a smart home or office.

The Champion 3400 produces 3100 watts when powered with gasoline and produces 2790 on propane fuel. These outputs can power a refrigerator, air conditioner, and several lights. The machine has a sensor that functions in low-oil shut-off, preventing more damages to the system.

The unit produces 59 dBA at a distance of 23feet—much quiet than the regular. You can use the recoil or the quick start 3-point switch. Also, it has a cold start tech that powers the machine seamlessly to enable you to start the generator faster in the cold.

However, its impressive performance is limited by its much smaller tank size (1.6 gallons) that makes the generator last for shorter periods. Its gasoline runtime is 7.5 hours, and on propane, 14.5 hours while carrying a 24% load. 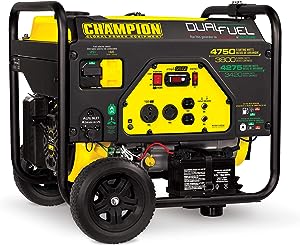 The Champion 3800-watt dual-fuel is one of the most efficient dual-fuel generators. Connecting the propane hose to this equipment is so easy and effective, dissimilar to connecting the hose to other generators, which is usually messy.

The unit also enables you to switch between the varying fuel types without stress. It comes with an electric start engine if you don’t want to use the coil starter. In addition, the generator functions properly for camping and RV.

The generator runs on a 3800w wattage on gasoline and 3420W on propane, which is much balanced for any 10,000 air conditioner.

Also, note that the Champion 3800 is not an inverter generator but a conventional generator. On the contrary, this unit is noisy when carrying a 50% load.

Another high-performance conventional generator is the Champion 4000. This unit produces 4000 watts and is a great standby in cases of power outages. The 81.6 lbs. generator is also perfect for outdoor camping and RV.

The inverter feeds on gasoline, and its open frame enhances the sound of the generator. The Champion 4000 produces 64 dBA, which is typically half of the noise produced by other generators that offer the same power.

It offers clean 4000 powering watts, and its running power is 3500 watts. Effective generators usually cost over $1,000, although a generator under 300 bucks can be quite efficient. 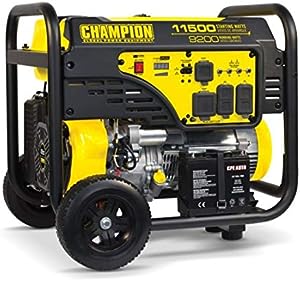 This generator is the biggest and the most powerful movable generator Champion has provided.

The 459cc OHV engine provides a running wattage of 9200watts. This enables the generator to power the most power-consuming electrical appliance, including MIG welders.

It can comfortably power every home appliance such as refrigerators, deep freezers, 10,000 BTU ACs, and garage door controls systems. A generator of this size has a 7.7 gasoline tank; also, even while carrying 50% load, it would be able to run for more than 10 hours.

Is Getting a Champion Generators Worth It?

Since its inception, the Champion company has sold well over 2.5 million generators in North America, scaling up the global market. The high-quality portable generators come in different variations and novel fuel combinations. They are also much quieter than the usual portable conventional generators.

Hi, this is Barton. After completing my graduation, I worked for a generator manufacturing company as a quality in charge. I worked there for a couple of years and then started my own business where I sell different types of generators. But the reason behind creating Generatorhelper is, I found that most of my buyers don’t have proper knowledge about generators. As a result, they pick the wrong one most of the time and don’t get the right output. So I decided to write on this matter and help everyone through this site who’s looking for a generator.